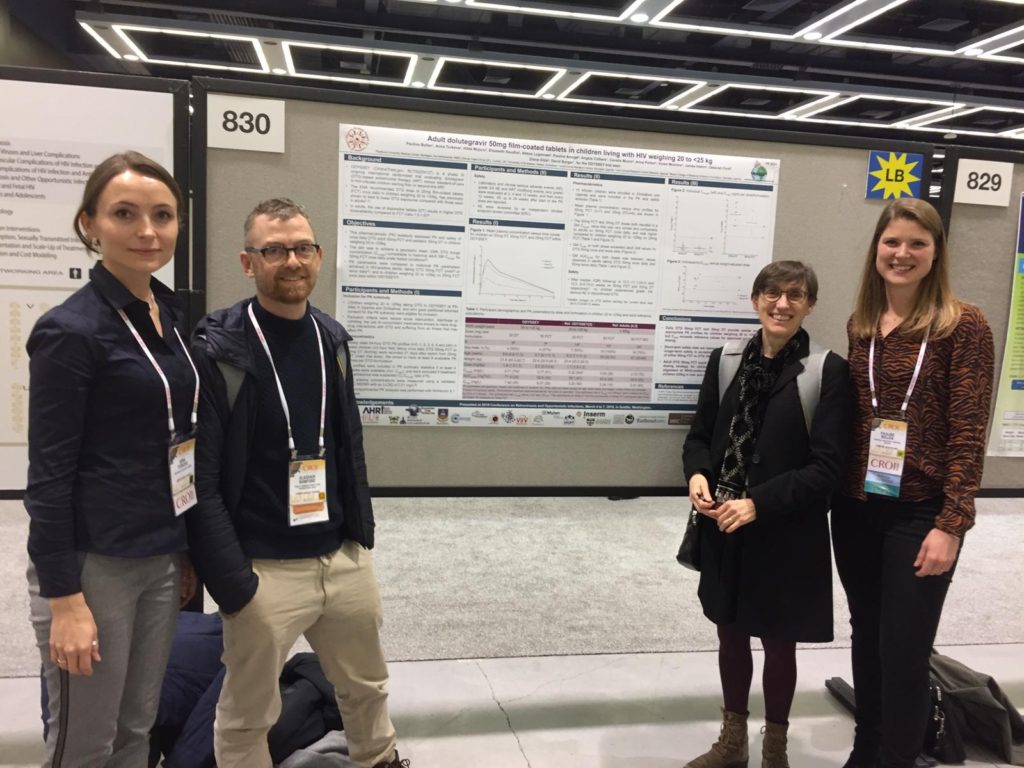 We are pleased to announce that ODYSSEY project team members Pauline Bollen and Anna Turkova successfully presented a poster with the results of an important pharmacokinetic sub-study on the use of adult Dolutegravir 50mg tablets in children living with HIV and weighing 20-25kg. The poster session took place at the recent Conference on Retroviruses and Opportunistic Infections (CROI) in Seattle, and was also attended by the ODYSSEY ERC members Hermione Lyall and Alasdair Bamford. The poster generated a significant amount of interest at the congress, suggesting that adult doses of an antiviral drug could offer a practical and accessible option for children in that weight band living with HIV.

Dolutegravir (DTG) is an antiviral drug, which has been shown to be effective and safe as part of once-daily treatment for adults with HIV at a daily dose of 50mg. Smaller dose tablets have been developed for children (e.g. 25mg) but are not widely available in Africa. ODYSSEY is a large ongoing global trial evaluating dolutegravir-based treatment in 700 children, mostly from Africa. In a previous pharmacokinetic sub-study, we showed that the adult dose (50mg) provides appropriate drug blood levels for children weighing over 25kg; this practical dosing has been included in the World Health Organization (WHO) dosing guidelines.

The study showed that the 50mg film-coated and 30mg of dispersible tablets gave very similar and appropriate drug levels of dolutegravir in the blood and were better than the 25mg film-coated tablet. The short-term safety data in the sub-study was also reassuring.

The sub-study concluded that either the 50mg film-coated tablet or 30mg (six 5-milligram) dispersible tablets should be used in children weighing 20-25kg. This conclusion has already been incorporated into the updated tables of antiretroviral drugs produced by WHO, and means that treatment for children heavier than 20kg can be the same as for adults.