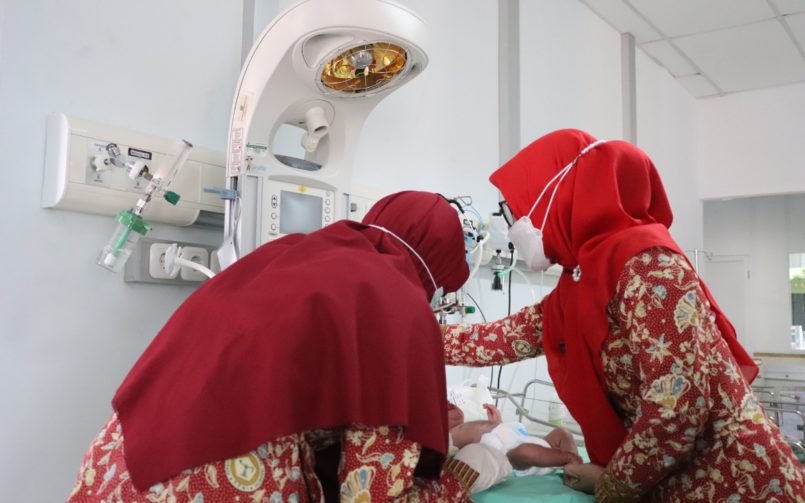 Geneva, 26 April 2022 – A large study focusing on newborn babies with clinically diagnosed sepsis has revealed the impact of antibiotic resistance on neonatal sepsis, a major cause of death in newborns.

At the European Congress of Clinical Microbiology & Infectious Diseases (ECCMID), the Global Antibiotic Research and Development Partnership (GARDP) has released a second wave of findings from its study on the outcomes of more than 3,200 newborns with neonatal sepsis, a life-threatening bloodstream infection that affects up to 3 million babies a year. The study shows that an increasing number of babies die of resistant infections as the current treatments have become ineffective.

The observational study, conducted by GARDP and key partners from 2018 to 2020, was carried out at 19 hospitals in 11 high-, middle- and low-income countries across four continents. It assessed which antibiotics are currently being used to treat newborns suffering from sepsis, and to what extent resistance makes these treatments ineffective. The aim of the study was to inform the development of improved antibiotic treatment regimens for neonatal sepsis worldwide.

“Babies are especially vulnerable to infections because of their underdeveloped immune systems,” said Sally Ellis, Children’s Antibiotics Project Leader for GARDP. “Compounding the problem is that babies are dying because of the lack of good treatment options. This study has given us a wealth of data on neonatal sepsis to design new and improved treatments specifically for babies.”

Overall, 11% of newborns with suspected neonatal sepsis died across hospitals and regions during the study period. This increased to 18% in newborns where a pathogen was detected in their blood culture. Overall the mortality varied markedly between hospitals, ranging from 1% to 27%.

“With infections still remaining the major cause of death in neonates worldwide, the development of antibiotic resistance and the lack of suitable formulations are of major concern. It is a priority for Penta and GARDP to join efforts to tackle these issues,” said Professor Carlo Giaquinto, University of Padova and President of Penta–Child Health Research.

Principal Investigator Mike Sharland from St George’s, University of London, who is also the Antimicrobial Resistance Programme Lead at Penta–Child Health Research, said: “Our study has shown that antibiotic resistance is now one of the major threats to newborn health globally. There are virtually no studies underway on developing novel antibiotic treatments for babies with sepsis caused by multidrug-resistant infections. This is a major problem for babies in all countries, both rich and poor. This study has allowed us to design a major new global trial of new treatments with a goal to reduce mortality from neonatal sepsis.”

The study showed that the use of antibiotics varied noticeably across sites in Bangladesh, Brazil, China, Greece, India, Italy, Kenya, South Africa, Thailand, Vietnam and Uganda, with many different antibiotic combinations being used, often without any underlying data.

The World Health Organization (WHO) recommends the standard antibiotics – ampicillin plus gentamicin – for the treatment of neonatal sepsis, but the study showed that many hospitals are using other combinations due to high levels of resistance to the WHO-recommended treatment.

The findings highlighted a worrying trend that many physicians were forced to use last-line agents such as carbapenems due to the high degree of antibiotic resistance in their treatment units. Last-line antibiotics were prescribed to 15% of babies with neonatal sepsis enrolled in the study.

These results are in line with the recently released Global Research on Antimicrobial Resistance (GRAM) study. It found that antibiotic resistance is growing and killing many more people of all ages than previously known: in 2019 alone, nearly 1.3 million deaths were caused by bacterial antimicrobial resistance (AMR), including nearly 140,000 deaths in newborns.

GARDP carried out the neonatal sepsis study in collaboration with St George’s, University of London; Penta–Child Health Research; the Medical Research Council Clinical Trials Unit at University College London (MRC CTU at UCL), whose research team led in analysing the data; and the University of Antwerp.

“There is an urgent need to develop and ensure access to novel antibiotic treatments to keep pace with rising rates of drug-resistant infections among babies with neonatal sepsis,” said Manica Balasegaram, Executive Director of GARDP. “We are incredibly grateful to our numerous partners and funders who have given us essential support to make this observational study possible. Guided by these new insights, we have the opportunity to place children at the centre of the international response to antibiotic resistance.”

GARDP is using the data from this study to design an upcoming interventional trial, which plans to identify better treatment regimens to overcome resistance to the current recommended treatment regimens. The NeoSep1 trial will test the safety and effectiveness of three potential new antibiotic combination treatments, ranking them against existing commonly used antibiotic regimens for neonatal sepsis. It will also look into the relative effectiveness of other approved but less commonly used antibiotic treatments and describe local patterns of antibiotic resistance. The trial will begin in Kenya and South Africa later this year and will be expanded in up to eight additional countries in 2023.

“The observational study provides very important insights on the status of resistance against the current treatments for neonatal sepsis,” commented Hanan Balkhy, the Assistant Director-General for AMR at the WHO. “We are now starting the process to review and update the WHO guidelines for the treatment of neonatal sepsis. These findings as well as the upcoming GARDP trial will provide important evidence for this process.”

For doctors and staff working in neonatal wards, the observational study has been an important step forward.

“It breaks my heart to see a baby dying when an antibiotic hasn’t worked,” said Tanusha Ramdin, Senior Neonatologist at the Charlotte Maxeke Johannesburg Academic Hospital in South Africa, and Sub-principal Investigator in the observational study. “I’m hoping that this work will be a springboard towards developing more antibiotic options and lifesaving outcomes for babies in our care.”

GARDP has also released a policy paper with several recommendations to strengthen the international response to neonatal sepsis.